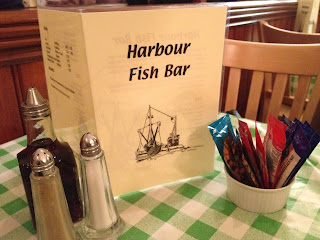 So there we were, it being Friday, eating our fish and chips. From the photo, it looks as though there are not many people about, but the tiny place was packed, not just with people sitting but queues of folk waiting for their takeaways and I would lay a bet that not many of those were practising Roman Catholics.  But fish on Fridays is somewhere to go, isn't it - somewhere to locate ourselves in these Godless and, some might say, God-forsaken times.  Like pancakes on Shrove Tuesday, chocolate eggs at Easter, Turkey at Christmas, it gives a kind of rhythm to the weeks and months and the ancient hearth is, if not exactly renewed, then at least not entirely lost.  We feel it somewhere in the body of us.  The fish bar is not anywhere near a harbour, but that doesn't matter.  There is a drawing of fishing boats on the menu, we know that fish come from the sea and we can imagine ourselves near it, salt spray in the air and the mew of a seagull.

The mater and her new half-hip are back at home with zimmer frame, walking sticks and codeine for pain relief.  Old age, rather like M.E., isn't for wimps, and until now the mater has been sprightly with weekly Pilates, acqua aerobics and constantly moving about.  Unsurprisingly, she doesn't like this state of affairs.  In the fish bar Mr. Signs and I got to talking about how it would be when we are nearly ninety.  He reckoned that by then he would be long dead as his parents didn't make it beyond eighty.  I reckoned that I ought to be dead before him because M.E. does do that to a life - shorten it, I mean.  But because it has taken so much of the living I would like to have done, I feel I am owed something in the way of payback time so don't accept that I won't make ninety and beyond, whatever the statistics.  When the great big ship with the black sails comes in, will we be standing at the harbour meekly waiting to be taken?  I suppose that is the best way to go - gently into that good night.  But right now I can't see it.


There happens to be a Sandy Denny retrospective on the box as I speak, so it seems right and fitting to echo the lady:

And I know you won't believe me though it is the truth to tell
that the living it is hard, oh but it suits me well.

Though truth to tell (mine) I want for the living to be easy sometimes, the years to keep on turning, with pancakes in their season, chestnuts roasting on an open fire, a bit of singing and dancing - fish and chips on a Friday.

Labels: food, life and stuff, reasons to be cheerful

Sandy often comes up trumps, don't you find and boy, did she have a messy life !

I don't know that much about her life - love some of her songs, oddly more now than then.