Three Weddings and a Funeral 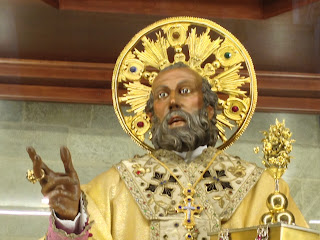 Is it time for a post?  Already Italy seems a distance away – in time, I mean.  Obviously it is a distance away from Forest Edge, Blighty, where I now sit looking out at autumn again, which is what we always seem to come back to these days, even in June.  The wind is even now tearing at the wild cherry tree, whose days are numbered because it is growing too close to the garden studio and is altogether too huge and obliterating (I will miss it though, and the wood pidgeons whose home it has become).


In Puglia there was wind too, but there was plentiful blue sky, gelati, cherry trees whose fruit we  picked and ate by the handful, focaccia baked in the wood-fired oven in the grounds of the organic farm where we were based.  Am I talking about food again?  It was not all about the food, though it almost could have been (extraordinary slow-cooked dinners each night, with bottles of Primitivo and home-made liqueurs).  It was about being in Elsewhere.  No-one spoke English.  I mean they really didn’t, not even a bit of it.  At the farm we managed with French and German and amazingly some of my ancient grade E Italian O level came back to me.  Not enough, however, to properly converse with the wild-eyed man who accosted us on a narrow stone path at the extraordinary Matera caves which had been dug out of rock and had housed people (including the desperate, malaria-stricken poor in the 1940s, as described by Carlo Levi in Christ Stopped at Eboli) for centuries.  The man led us to a small cave-church, talking at high speed.  When I asked him if he spoke French he became incensed.  He pointed to the arcane etchings on the walls and black and white photographs of peasants from decades past.  I understood enough of what he said to make out that no, he damn well didn’t speak French, he was an Italian, and moreover he liked people who were intelligent and cultured, and what the hell were we doing there anyway with stupid questions like that.  He handed us a leaflet with details about a local B and B which we didn't need but allowed me to say grazie.


I was keen to see the insides of a few churches but whenever we went inside one there was something going on.  May, as Mr. Signs pointed out, is the time for weddings, and we inadvertently gatecrashed on three of them, standing at a respectful distance at the back.  A small church in Polignano looked as though nothing much was going on.  Inside, there were people in some of the pews praying and another couple dressed in black (but that was not unusual) near the front, with their heads bowed.  As we came close they turned their heads to look at us.  I smiled and then saw that between them was an open coffin and guessed that a funeral service would shortly commence.  Back outside, I realised that we had gone in holding cones of gelati which we had been licking.  I felt a sudden impulse to go back inside, apologise and explain; also to sit with them for a while, by the dead person, for what reason I didn’t know.  I was from Elsewhere, I might have (but not really) said – and also Elsewhere in my own country because of a chronic disease which was generally not understood, and which had prevented me from spending time with my father before his death, I had not reached the hospital in time to say goodbye and after he had died they whipped his body into the mortuary and that was the last anyone saw of him, but if there had been a church like this with a place to put his open coffin I might have sat and kept him company in the days between his leaving the world and going into the earth.


We finished our gelati, got into the hired car and went back to the farm to read and wait for dinner.


In Conversano there was the annual festival of Maria delle Fonte, with processions through the ancient streets, girls like white birds in their first communion dresses, serious-faced men with medals on their black jackets carrying the cross with Christ crucified and a banner of the Madonna with her right hand held over her breast, looking mildly affronted.

Why do you keep wanting to see these things? said Mr. Signs.  It’s all about misery.

A woman’s voice through a megaphone intoned Ave Maria and made a long address to the Sanctissima Madonna.  In the narrow cobbled streets people, most of them old, who did not go to the actual procession stood or sat on chairs outside their houses dressed in their best clothes and joined in the Ave Marias.  I became desperate for somewhere to sit and something to eat.  A café in the square sold cold beers and tuna fish salad.  The younger people ate, smoked and talked in loud voices ignoring the processions, and the older people stood and mouthed along with the loudspeaker voice.


We flew back to England from Bari and took the opportunity to visit the church of St. Nicholas, which is mentioned in all the guide books. It is an important church because the Saint (the original Santa Claus) passed by on his way to Rome and chose Bari as his burial place.  Mr.Signs pointed to a bigger than life statue encased in glass.  He sported a gem-studded golden halo and a flashy golden ring on one of his fingers.


Who do you think? said Mr. Signs.  Would you buy a used car from this man?  He pointed to a box full of coins and another stuffed with notes.  And he wants your money.


I put half a euro into the box and lit an electronic candle for my Dad.


Our last lunch was in a small, hidden away café of the kind that tourists don’t usually find where we had what was probably the freshest fish I have ever eaten.  In Italian, I asked the name of this kind of fish.


Orata, said the owner, and then: is in English Sea Bream.
Posted by Reading the Signs at 12:41 PM 5 comments: