It is going well, this new phase I have stepped into. I am not entirely sure what makes me say this, other than a sense of something small but vital having clicked into place, despite the usual health and strength issues. Sometimes the simple fact of making a decision is enough to get things moving in a different direction, and I have recently made three decisions, one of which already promises to bear lovely fruit.

I have realised that I am screen-sensitive to a degree I had not appreciated. In other words, it is much better for me not to spend very much time in front of one, especially if it belongs to a laptop, and more especially if it involves a great deal of reading. Typing up what I have written, which doesn’t take long as I am a speedy touch-typist, is fine. Thank goodness for the notebook. I have still to find the completely perfect ballpoint – but perhaps one never does.
Posted by Reading the Signs at 8:55 AM 9 comments:

It isn’t as though I took a long trip away or did anything spectacular, I just went for a few days to the far north of Scotland. But time in another place can do the trick, especially if you don’t (I don’t, can’t) travel very much. And it has been growing for a while, this feeling that perhaps the time has come for me to retreat a bit further, so as to find some new ground beneath my feet. I have already given up so much in the way of work, groups and projects that I spent time and strength building up. It was necessary, I couldn’t carry on living always at the end of my tether. What did I think? That my new, serene life would lead me to green pastures and springs of living water from which I could drink and be strong again? That I would find a way to order my life so that I could be (to quote Ben Okri) an “essentialist” – take up my pen and write, and all manner of things would be well?

The spirit was always willing, it is ardent and steadfast. But my M.E.-afflicted mind and body fail and fail. We all sing this song, those of us who have lived for many years with M.E. We try not to but out it comes, from the breast, because we want so badly to live our lives and do the thing that is in us to do: paint, take photographs, write, sew, plant, create. We try, but sometimes there is such a small space in which to be alive, and then we think we should do the decent thing and shut up about it but we can’t, it goes against nature. Keep howling, raging, singing, one must, and keep breathing. I have been touched by many voices here in this virtual world that became, for a while, a hearth for me. People come and go, they take on names that become a channel for some essence of them, and when they go or disappear, it matters.

So I don’t want to do that – disappear - at least not without saying goodbye. But retreat is in order because I don’t have the wherewithal to keep posting much if I am going to bring more substantial focus to the writing I still hope to do. I began this blog as a kind of simple reflective practice (I say simple, but I used initially to edit my posts) and to see what might emerge. I didn’t anticipate that it would become an actual place with real people who mattered to me, or that there would be so much fun to be had in the exchanges. Good times.

But back to the I-Ching, which is where I began when I started the blog: Care of the Cow, it seems, does not necessarily bring good fortune and the Ridgepole is always in danger of breaking, and knowing these things does give a kind of freedom. I am also reminded, as though that were necessary, that the Wanderer has no place to lay her head. It doesn’t do to be too literal about these things, but the motif is there quite plain and I have my knapsack here at the ready. I am packing the notebook, the ballpoint and a strip of Nicorette chewing gum. Anything else I should remember? Oh yeah, my sweet little razor-sharp Opinel knife, because you never know. And I quite fancy the thought of whittling while I’m whistling by the fire on a dark night.

I will be putting my head through the door now and then, coming back for the occasional rant or Tweet (as in Twitter, but don’t worry, I’m not going down that road), and I’ll be looking in on y’all, emailable as usual and - gawd! As my dear old Dad liked to say when someone was taking too long hovering on the threshold: "forgotten, but not gone." 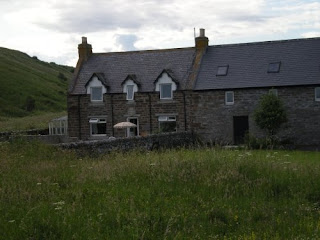 Here is the lovely house where we stayed. Like mine, it is on the edge - but in this case it is hard by the sea rather than forest, these windows look right onto it. It is cloudy in the photo, but we sat underneath the umbrella in bright sunshine, to eat and to read and write. 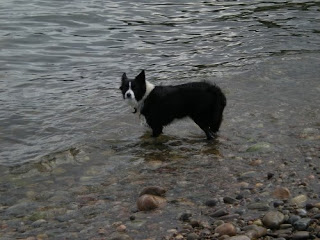 This is my new best friend - a border collie called Flora who goes every day into the sea, either to swim or just stand and look out to sea, meditating on the horizon or watching trout leap from the water. She is both intelligent and hyper-active and, having no sheep to herd, needs four walks a day and is inclined to chase the chickens if she gets bored. Not the kind of dog that I would be able to keep, more is the pity, but it suits Ms North perfectly for when she is not writing and teaching she is walking with Flora and both are in their element.

Here is the beach that is right by the house. The photo was taken very late at night, it never really gets dark here in summer. 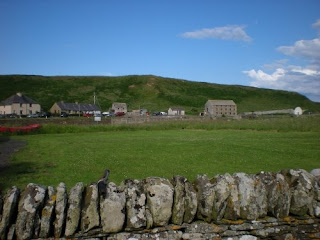 And just to prove that the skies really were (mostly) blue. A view from the side of the houses across the river. The place is a small hamlet, there are no shops to speak of, unless you count the hut that sells bedding plants and motor oil. We ate fresh mackerel caught by someone who goes out in his boat every night to fish.
While we were there, Ms North saw one of her poems published as one of the runners up in the Mslexia poetry competition - and the next day a letter came with the news that her children's story has been shortlisted for the Kelpies prize. She will be reading from it at the Edinburgh Festival, when the results will be announced - and perhaps (nudge, nudge) update her blog with all the news. Auspicious? I should coco.
So I am back to my own particular edge and rather missing the granite beneath my feet, but fired up for something or other, and thinking about new strategies for doing more of what I want to do - the usual damnable restrictions notwithstanding.
More on this anon.

Posted by Reading the Signs at 1:01 PM 7 comments: