singing each to each 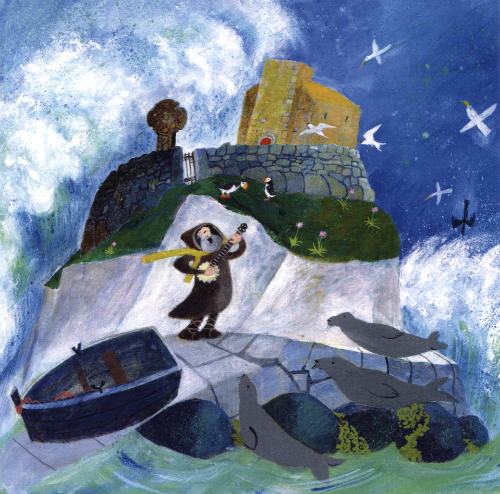 I had cards today.  This one arrived early so was the first that I opened.  Inside, the message that wished me a happy birthday said, "may the seals sing to you", which I read as auspicious.  Somewhere in the far North of Scotland, a seal once put its head out of the water and looked at me.  If there had been more time, I believe I may have caught its song.  I am not like the narrator in the The Lovesong of J. Alfred Prufrock who has "heard the mermaids singing each to each" and does not believe they will sing to him.  I have written stories about silkes and mermaids and it is only a matter of time.  But if you look closely at the picture, it becomes clear that the seals here are the audience.  St. Cuthbert is singing to them and the title of the picture (artist Colin Smithson) is 'St. Cuthbert Sings to the Seals'.  The question is whether the seals came close to the saint, drawn by his singing, or whether he began to sing in response to their presence.  Either seems good, but I suspect it is probably the former because he has brought his banjo with him.  The Sign is clear: the seals want my song just as much as I want theirs.  I don't have a banjo, but I have a voice. It is true that I live on the edge of a forest (and sometimes by the sea, but not one where seals come very often, if at all) but this should not be a problem.  If you sing with true intention they hear you, the creaturely familiars, wherever they be on land or in the sea.
Posted by Reading the Signs at 8:38 PM

Hope you had a brill day on your birthday, and another one today.

"The Sign is clear: the seals want my song just as much as I want theirs. I don't have a banjo, but I have a voice."

Anna? Mwah! x (and today was difficult but we soldier on innit)

And bless you too, Elpee - if I have reminded you of your own voice then I am very happy.

Moby seems to like when I sing, or D plays guitar, he hangs nearby, but does not join in.

I know this card - sent it once to a friend! I think it's Lindisfarne...