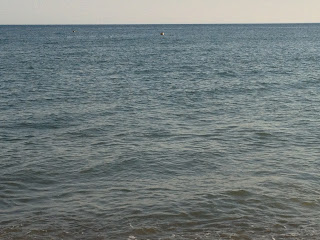 Good morning from Brighton.  I say this because I had a good night, meaning that I slept, more or less, right through and got an actual very-much-needed nine hours.  I think there are ghosts here that help with this.  The ghosts are not of dead people but of the previous occupants - a lovely family with two small girls.  The children slept in the bedroom and the parents on a sofabed in the living room and despite the fact of lack of space surely driving the parents bonkers, they and the flat had a lovely vibe.  The mother was French, softly-spoken and the father wore a gold earring and had a voice that was both camp and masculine.  He told me how much they had loved the flat.  The children were quiet, but in a happy, absorbed way.  The little one was still a baby, carried around on her mother's hip.  I heard the mother sing a short phrase to her in French.  I imagine that she sang to her children at night when they were going to sleep and that the walls of the flat absorbed the songs and the mood.  After we had bought the flat someone emailed to ask me if the walls were happy.  Anyone with even a trace of poet in them knows that walls are never just walls (small nod to Freud who said that sometimes a cigar was just a cigar) so I got the question.  And yes, they are.  The walls of Signs Cottage also.  This is one of the reasons we decided to live there, even though there wouldn't be enough space to swing a cat.  Also, we are not people who would ever wish to swing a cat.  But the Signs Cottage walls have other moods also, they are more complicated, as you'd expect from walls that are covered with so many books and where much has to be fitted into small spaces.

From the small balcony of Brighton flat you can look down and see the sea, which rises up like a blue or grey wall, depending on the weather.  Sometimes it is possible to forget about perspective and imagine that it is a wall that dissolves the closer I get to it and becomes something I can immerse myself in, as I have been doing whenever possible.  I think I will go in again today as the water temperature is 16.9 (I can check this online), the warmest it has been so far.  For many people this is much too cold but my body has become accustomed to it - welcomes it, even.  I don't know if I am in my element, but it does in some measure restore me to myself.
Posted by Reading the Signs at 10:55 AM

thank you so much for this - on walls and the sea both, both of whose solace resonates but only one of which is in reach currently. I love what you say about the family and the happy walls.

Here it's the first wood burner lighting of the season

Good to see you, Fire Bird - I feel very lucky to have access to both forest and sea right now, and for the happy walls.

I am thinking we should perhaps get our chimneys unblocked in the cottage ...

Ah yes, the walls. I can tell if there's been lots of music in a house/flat by the walls. Like you, I wouldn't choose to live in a place that didn't have a good wall vibe.

And snap with the sea! Our first day of spring here at the bottom of the world yesterday and a balmy 25 degrees C. Our water was cold too but absolutely worth it.

Pants I'm going to miss it so much when it becomes too cold - and in the looong winter here!

What an interesting character you are!

I think it is lovely, Signs, that you sense the goodness encapsulated within walls. I tend only to be sensitive to the anxiety-inducingness of some buildings. I think this may speak volumes of us, respectively.

But respectively… you are lovely. No, shut up. You just are. Full stop, no returns, mine's the last word.

Anna, guess who it was that emailed to ask about the walls ...